EHD is a viral infection (genus Orbivirus, family Reoviridae) caused by epizootic hemorrhagic disease virus (EHDV) that is primarily transmitted by biting midges (genus Culicoides) to several species of cervids, especially white tailed deer. Major geographic expansion of EHDV has occurred during the past 40 years, associated with increasing frequency of large-scale outbreaks. Typically, outbreaks are caused by EHDV-2 in Ohio in the late summer and early fall. Occasionally, EHDV-1 has also been detected in Ohio in the past. In 2006, the exotic EHDV-6 was first detected and has been found in the central and eastern US. In September, outbreaks of EHD virus have been suspected in the captive and wild deer population. So far, eight samples have been positive for EHDV. Among them, four samples from four different counties were positive for EHDV-6. This is the first report of EHDV-6 in Ohio. In addition to EHDV-6, EHDV-2 has also been detected from samples submitted to our laboratory, which means that both strains of EHD viruses are currently circulating in the Ohio deer population and contribute to the outbreaks. Captive deer that are vaccinated against EHD-2 are not likely protected against EHD-6 virus. The following map illustrates which counties have produced EHDV-positive samples in 2020: 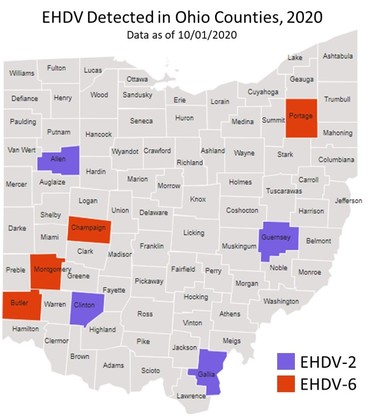 Sporadic clinical cases and outbreaks of EHD have also been reported in other cervids (mule deer and elk), cattle, bison, yaks, bighorn sheep, and pronghorn antelope, although most infections in these species seem to be subclinical. Deer infected with EHD can show little or no clinical signs (peracute illness) and are found dead, while in other infected animals the disease may linger for weeks and the deer may have fevers, anorexia, lethargy, weakness, lameness, and respiratory distress. The head and neck may swell and there may be ulcerations / erosions of the oral cavity with excessive salivation and nasal discharge. Diarrhea and severe dehydration and weight loss may occur if the animal survives the acute phase of the disease. The deer may show no fear of humans and often can be found near or in bodies of water due to fever and dehydration. More information about EHD.

EHDV does not infect humans.